Olympic athlete Jorinde van Klinken moved from the Netherlands to the U.S. in 2020 to train as a member of Sun Devil Athletics and attend the Thunderbird School of Global Management. One year later, she is halfway through her program and an Olympian.

Last year she hit a Dutch record-shattering 70-meter mark in the discus throw, while maintaining a rigorous training and school schedule. She credits her fascination with other cultures with prompting her to train in the U.S. and remains inspired by the stories of other T-birds and Sun Devils.

“It’s almost crazy that people are impressed by what I do when I hear what they do,” the 21-year-old said.

With so much time left to achieve more in her sport, van Klinken has plenty of room to grow as an athlete and as a future global leader; she is pursuing a master's degree in global management (global business). She has ambitions inside and outside the sports arena and is well on track to achieve whatever she focuses her mind on accomplishing.

Question: In an interview you did last year, you were asked your biggest goals and responded that they were to go to the Olympics and throw 70 meters in the discus. You’ve now done both those things. How does that feel, and what are your biggest goals now?

Answer: It’s still so surreal that I have achieved those things at this age. Most of the women around me are 30 or older, and it’s not common to accomplish those goals so young in my sport, which makes it so special and hard to believe, but thinking back about those moments, I won’t ever forget them. Throwing 70 meters was at a meet in Arizona. A few days before, I threw 65, which was already a huge personal record, so I wasn’t really excited going into that meet. That was an extraordinarily special moment. Also, of course, going to the Olympics and competing on a global stage was so cool as well.

A: It’s hard to process not being around anyone else who has been there. I like to process by talking through things with other people. I’m already trying to figure out how I feel about it, let alone talking to people who can’t relate to it.

Every year we have super exciting championships in track and field. This year, it is in Eugene, Oregon, for the world championships. If I keep making the same progress, I think I have a shot at a medal. It sounds so crazy to me right now, but looking at my progress, that would be really cool.

My other long-term goals are to medal at both my events, shot put and discus throwing, at the Olympics. That will probably take a few more years, but as I mentioned, I have a few more years to keep training. Jorinde van Klinken says she has ambitions outside the sports arena as well.

Q: You attend one of the most diverse business master’s programs in the United States. Since sports are also very international, how do the two relate in your experience?

A: It’s so fun. That’s one of the things I loved about sports was meeting people around the globe and hearing about their countries and cultures. Things that are normal to me may seem crazy to someone else who was raised somewhere else. At Thunderbird, the professional experience plays into that as well, both in informal spheres, how people view other cultures in their businesses, and how cultures impact how you behave in your professional-social careers. They complement each other pretty well, in fact, and that’s one of the reasons I love Thunderbird. It’s so interesting to meet so many people through my sport and my school! It’s something I enjoy every day.

Q: What is something you’ve learned from a Thunderbird classmate or professor that has helped you professionally as an athlete?

A: We reflect so much on ourselves because we talk about diversity a lot, and that helps us figure out who we are, what our strengths are and how we can utilize our strengths, so that is something that helps me in my sports career as well, to be even better at coping with failure and disappointments.

I also moved to another country (from the Netherlands to the U.S.) to train with a coach from another culture. Through school, I have all the context of cross-cultural communication and how influential culture is in interacting. 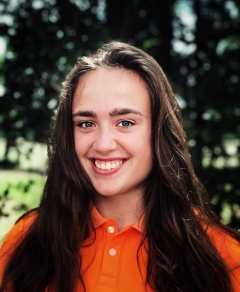 Q: What do you want to do with your talents in the long term?

A: One of my biggest passions is innovation. I want to be an innovation manager someday. I’d love to do it sooner, but I see myself still being a professional athlete in 10 years, although I don’t see myself continuing in sports after my throwing career. I want to do something completely different. It’s a bit hard right now to estimate when that next adventure will come, but I know that with my ASU Thunderbird degree, I’ll be ready.

Q: What drew you to Thunderbird at ASU?

A: When I finished my bachelor’s degree, I didn’t feel done studying, so I really wanted to pursue a master’s in global business. The MGM program is exactly what I was looking for. I wanted to have a broad business management degree to complement what I learned about innovation in my undergrad studies. The international aspect of Thunderbird just fit me because I’d had the experience of meeting people from around the world already.

At Thunderbird, you don’t just learn from your professors but also your classmates. I think that’s one of the coolest parts. It’s almost crazy that people are impressed by what I do when I hear what they do. People have their own business, and you name it, they do such incredible things, and you never hear the same story twice. I love that about Thunderbird.