To Succeed as an Entrepreneur, Be More Like an Immigrant

Some of the most successful entrepreneurs are immigrants. Many of them are billionaires. And the companies they founded have created trillions of dollars in value for shareholders, employees, and customers alike.

There’s Google co-founder Sergey Brin, born in communist Russia. The man who could take us to Mars, Elon Musk, from South Africa. Arianna Huffington, founder of the eponymous news site, from Greece. (And the list goes on.)

There are lesser-known names, too, of course. Like Jenny Q. Ta, CEO of Sqeeqee, who’s from Vietnam. Tomas Gorny, CEO of Nextiva, from Poland. Claudia Mirza, founder of Akorbi, from Columbia.

And Fernando Cruz, CEO of Dynamond Building Maintenance, from Brazil.

Fernando Cruz credits “the immigrant mentality” – along with his mother – for turning him into a successful entrepreneur.

Cruz may not be a household name, but he has many things in common with immigrant entrepreneurs like Brin, Musk, and Huffington. Having began life in a Brazilian favela, Cruz is a great example of a successful entrepreneur who came to America with a dream and a spirit that he calls the “immigrant mentality.”

And Cruz, who holds an executive master’s degree in global management from Arizona State University's Thunderbird School of Global Management, represents a growing number of immigrants who succeed as entrepreneurs at a quicker pace than people born in the U.S.

Business success of the American immigrant

In the U.S., immigrants are almost twice as likely to become entrepreneurs as native-born citizens, according to the Kauffman Foundation’s Index of Startup Activity. Immigrants represent about 13% of the country’s population overall but 27.5% of America’s entrepreneurs.

And they are launching successful businesses. A report from the Partnership for a New American Economy found that in 2016, 40% of Fortune 500 firms had “at least one founder who either immigrated to the United States or was the child of immigrants.”

The immigrant story is often associated with men, yet 40% of immigrant entrepreneurs in America are women, according to the National Women’s Business Council. And 13% of all female-owned companies are run by women who were born outside of the U.S.

What is the Immigrant Mentality?

Business leaders can find value in identifying factors that spark the entrepreneurial success of so many immigrants. It’s helpful to understand the immigrant experience and to identify what they have to offer in their new adopted home. And figuring out what makes immigrants successful may help identify traits and behaviors that contribute to anyone becoming more entrepreneurial.

Fernando Cruz says his success comes from what he calls an “immigrant mentality.” Once a negative, even pejorative, term, Cruz is reclaiming the phrase and using it to describe the positive attributes that have made him a success.

“Once a negative, even pejorative, term, Fernando Cruz is reclaiming the phrase ‘immigrant mentality’ and using it to describe the positive attributes that have made him a success.” – Click to tweet

Cruz credits his mother for instilling in him the mentality that has helped him thrive in life and business. “I grew up in a poor family, but I was blessed to have a mom who had a vision for me,” he says. Education was very important, but so was hard work. As a young boy, Cruz helped his mother sell water on the beach and went door-to-door offering to do odd jobs. “We had that entrepreneurial spirit. I could’ve been out playing soccer. But you always work hard for what you want.”

When he was 24, Cruz came to America, with $250 in his pocket and the promise of a $10 an hour job. But the job he’d been promised fell through.

“So I started mowing lawns," he says. "Then I learned to do snow removal. Then I got a job cleaning restaurants. I was going to school to learn English during the day. Then I’d go home, change clothes and mow lawns. At night, I’d shower and change and go clean restaurants. The next day, I’d do it all over again.”

That’s the immigrant mentality: “You do whatever it takes,” Cruz says. “Working two or three jobs, 20 hours a day if necessary. And that mentality never really goes away – it becomes your competitive advantage.”

“You do whatever it takes. Working two or three jobs, 20 hours a day if necessary. And that immigrant mentality never really goes away – it becomes your competitive advantage.” – Click to tweet

Immigrants thrive in business because of the many skills they pick up navigating a new world. Many successful immigrants, like Cruz, arrive in their new home full of promise and dreams about a new life – and not much else.

It’s not always easy. Whether they are fleeing dangerous conditions at home or just looking for new opportunities, immigrants often leave behind friends, family, and support networks. They then enter unfamiliar territory in a nation full of complex bureaucracy, discrimination, and uncertainty.

As a result, top of the list of attributes that come along with the immigrant mentality are assertiveness and creative thinking. Cruz also cites fear of failure as a great motivator. He was a skilled salesman, but never forgot what he faced if he failed: “If you don’t sell it, you don’t make money. And if you don’t make money, you go back to the favela.”

“Immigrants thrive in business because of the many skills they pick up navigating a new world.” – Click to tweet

Many of the attributes that help an immigrant succeed are the same as those that make a successful entrepreneur. In addition to assertiveness, creative thinking, and fear of failure, the following attributes may help immigrants – and entrepreneurs – succeed. (Roll over the photos for more detail.) 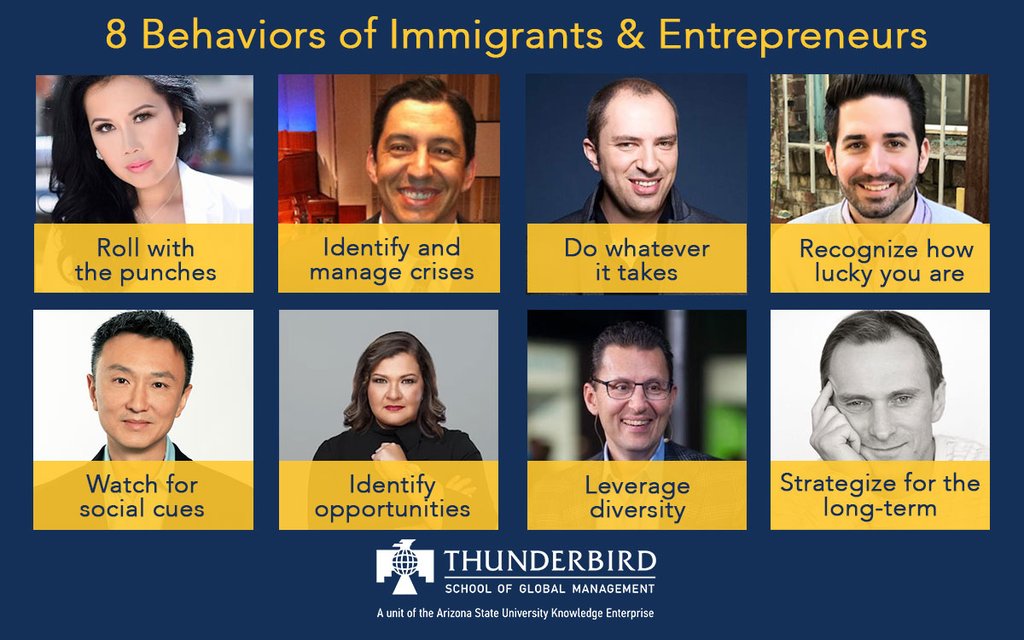 "Both the data and the anecdotes show that people with cross-cultural experiences are most likely to succeed." – Click to tweet

Wanted: People who get things done

But even if you're not an immigrant, you can adopt the 8 core traits of the immigrant mentality.

If you're an employer: As you interview new candidates, and work to develop talent within your organization, think about the eight traits described above. Just as those characteristics make for successful entrepreneurs, they make for successful employees as well. And while immigrants come by those traits by virtue of their experience, you can inculcate those traits within your employees as well, through training.

If you're an entrepreneur: Of course, it’s possible to be a successful native-born entrepreneur. But all entrepreneurs can benefit from developing in themselves the eight traits described above.

Bottom line: To succeed as an entrepreneur, or employee, or leader – be more like an immigrant.

Get Global Insight in Your Inbox